History of the Sherwood Family

The history of the Sherwood family begins in the early 1800s with the Connelly family coming  to Lawrence County, Indiana from Wilkes County (Later Ashe County) in North Carolina.

Elijah Connelly was not in Indiana in the 1820 census, however he was in Indiana as early as June 1, 1822, as he is mentioned as the first deacon of the Spice Valley Baptist Church.  His mother, Sarah, died on July 12, 1824 and was buried in the Connelly Cemetery on Joel's land in section 30 (as labeled below, or the small cemetery behind today's barns).  Elijah died September 31, 1831 at the age of 52.  He may have been buried in the same cemetery, but there is no headstone there now.  His land seems to have been divided between his children Francis (Franky) age 26, John age 24, Nancy age 22,  Benjamin age 19,  Elizabeth age 14, and James M. age 4. 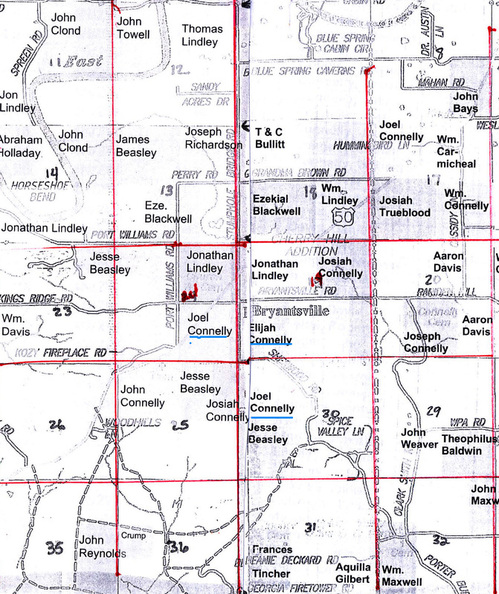 First Land Bought
Around 1832 the wars with the Indians in Illinois were over and the area was safer for immigration.  Several family members including Joel, Josiah and John headed west to the new land.  One account said that Joel went and raised a crop and came back to get his family at the end of the season.  It seems by 1830 the population of Lawrence county had increased greatly.  By 1835 the town of Paris which would later be called Bryantsville was plotted. Possibly some of the Connelly brothers felt there were too many people around.  The pioneers moved over the state line to the area of Clark and Cole County, Illinois.  In 1832 Joel sold his land to James and Matildy Beasley. Later in 1835 they sold the land to Lapsley Embree.  John sold his land to his brother William in 1837.

On May 29, 1835 Nancy (Connelly) and her husband Andrew Coleman as well as Johnson Mulky and his wife Franky (Connelly) sold their part of Elijah's land to his son Benjamin.  Benjamin Connelly and Julianne Pitt were married July 12, 1835.  In 1840 Elijah bought the SE part of the SW quarter of section 19.  Benjamin sold and bought again parts and pieces of the land. He is listed in the 1830, 1840, 1850 and 1860 census as living in Spice Valley Township.  On Jan. 6, 1850 Benjamin bought back the land in the W half of the SW quarter of section 19 (Elijah's Land) from Henry and Mary E. Culbertson and bought on Jan 10, 1853  the land in section 30 (Joel's Land) from Lapsley Embree.

Julianne and Benjamin had seven children between 1835 and 1852.  Julianne died December 27, 1856 and was buried in the Connelly cemetery.  Their children at her death were Mary, age 20, Sarah, age 17, David, age 16, Elijah, age 13, John, age 11, and Lucienne, age 4.  Their child,William, died at birth.   Less than one year later on December 23, 1857 Benjamin married Charity Miller Burton. Benjamin was 45 and Charity was 26 years old.  Susan Adelia (our great grandmother) was on born September 12, 1858.   Benjamin continued to buy and farm the land. He also had lots in the village of Bryantsville.  In 1866 Benjamin was listed as being assessed to pay excise tax for a Retail Liquors License.  Charity was the local midwife.

On Oct 1, 1872 at the age of 60 Benjamin died leaving no will.  His land of 623 acres was divided between Charity and the 5 children (Mary at age 26 and Elijah at age 22 had died.) with some land being sold to cover the debts of Benjamin.  The land was sold on November 3, 1873.  Charity received the land with her house, which is most of the NW quarter of section 30.  It took until 1876 to settle the estate.  In the settlement there was the mention that John was thought to be in Arkansas and Susan to be in Washington County. 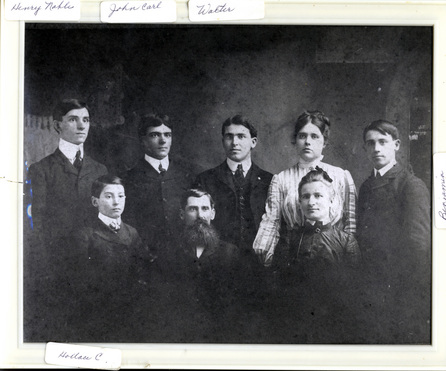 From Connelly to Sherwood 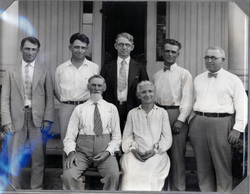 Charity married Thomas Voyles from Washington County on Aug 26, 1873. Sarah Connelly married James Meads in 1862. Sarah sold her interest in the dividing of the land to David Connelly in 1875.

In the 1880 census, Thomas Voyles and Charity were living in Howard Township of Washington County, IN.  On Sept 11, 1880 Thomas Voyles and Charity sold to Susan Sherwood all of the land that Thomas Voylas had brought plus the land that was Charity's part of the estate.  There were two provisions in the deed.  The first was that Charity retain the possession and use of the land and home during her natural life , with the passing of the land and home to Susan after her death. The second is that Charity Voyles release all rights, titles, and interest to all the real and personal estate of Thomas Voyles.

Lucienne Connelly (Benjamin and Julianne's daughter) married Daniel David McCain on Dec 22, 1878.  She received as part of her inheritance the NW quarter of the SW quarter of section 19.  She died on Nov 28, 1879 leaving Daniel and David McCain as her heirs.  Daniel had to sell the land because he had mortgaged the land to Reubin Miller.  The land was sold on April 26, 1882 to Henry Miller.  It is believed that the Millers were Charity's brothers.

Daniel Webster and Susan Adelia Sherwood continued to live in the house on section 30.  Sometime in the early 1880 the house burned down.  They built the present house while living in the "red barn."  There were 5 sons born to Daniel and Susan over the years:  Walter Clarence born Jan. 1, 1877 ( he became a doctor), John Carle born July 28, 1879 (he became a state senator),  Henry Noble born Dec. 8, 1882 (he became a college professor), Benjamin Harrison born July 26, 1888  (he owned the first car dealership and repair shop in Mitchell) and Hollace Chase born July 6, 1892. (he was a teacher, the first principal of Burris School in Mitchell and our grandfather).

Daniel Sherwood bought Henry Miller's land on May 29, 1884 and David Connelly's land on Dec, 23, 1887 adding back some of Benjamin's land to his farm.  Daniel continued to buy land to enlarge the farm.  In the 1894 he bought the SE quarter of section 24 which brought back into the family the land Joel Connelly original bought in 1816.

On May 13, 1930 Daniel died and Susan inherited all of the land.  When Susan died in 1946 she willed to John the land in NW quarter of section 19 ( the Turley land) and to Hollace Chase the home and farm containing 590 acres.

This  brings us up to today's families.  Hollace D. and Ed's  families were raised on the farm. Ed's widow, Dottie, and Hollace D. still live on the farm.  Dottie is living in the same house that Daniel and Susan built in the 1880's. The old barns can still be seen from their houses and are still in use.  Some of Hollace Chase's grandchildren now own stock in a corporation that was formed to keep the farm together for the next generations.

Each year members of the Sherwood family come back for a reunion on the farm.  The history of this small area of land has spanned almost 200 years with one family living in the same area. All this history may be the reason we all enjoy being on the farm when we can. 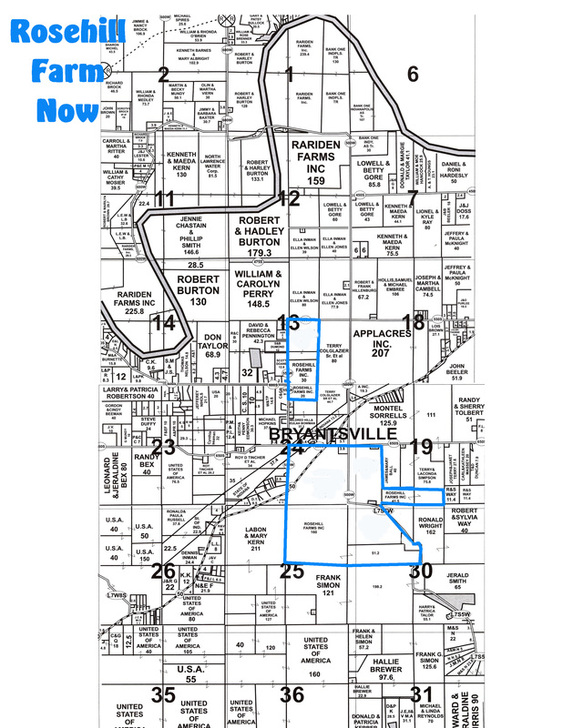